Sumo wrestling or simply sumo originated in Japan. It is the only country where you can find professional sumo wrestlers. The sport is considered as modern Japanese martial art even though its original definition is more than misleading since it has a history that is spanning many centuries. It should be noted that many ancient cultures and traditions regarding Japan's culture have been preserved in this Japan's national sport. Even today, sumo wrestling includes a huge number of different ritual elements like the use of purification by salt mainly originating from Shinto.

Sumo wrestling is a competitive sport where wrestler or rikishi attempts to force an opponent out of the circular ring while striking each other. The sport is not an Olympic sport, but it is recognized by the IOC. The rules of the sports are regulated by major Japan Sumo Association. It should be noted that sumo wrestlers are commonly required to live in certain communal sumo facilities known as heya where they spend all of their free time. Their meals and their clothing are strictly dictated by Japanese culture and heritage. 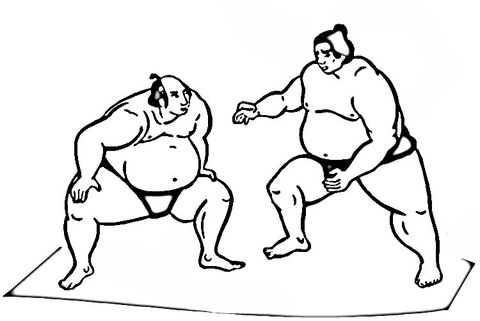 Professional sumo matches are organized by Japan Sumo Association while the members of this association are referred to as oyakata. Oyakata includes all former and current sumo wrestlers who are the only people allowed to train new sumo wrestlers. As we already stated, all members of Japan Sumo Association live in heya that is ran by oyakata. In Japan currently, there are forty-three heya that host more than six hundred wrestlers. Also, it should be noted that every professional sumo wrestler has to take name shikona that may be related to his real name. They also have an option to choose their sumo name given to them by their sumo trainers.

It is more than apparent that life of professional sumo wrestlers is more than eccentric. When it comes to the most famous sumo wrestlers we have to mention Taiho. Tahio is a true legend of Japan who is considered by local people as the greatest professional sumo wrestler of all time since he was able to achieve that rank of yokozuna which is the highest rank in this sport. Taiho also has won forty-five consecutive matches during his career. Another name we have to mention is Chiyonofuji. He was weighing only 120 kg, so he was considered very light on his feet for a sumo wrestler. Other famous sumo wrestlers are Futabayama, Mainoumi, Mitoizumi, and Takamisakari.